Who is Garret Garrels?

Garret first visited earth on February 4th, 1986, landing in the Smelter City of Anaconda, Montana, and growing up on a ranch. His mother, Joyce Garrels, said, “Garret learned how to speak when he was only two. Then when he was five, we learned how to understand him.”

Stuttering ran in his family, but his impediment proved to be the most normal of his peculiarities. One of Garret’s grade-school teachers said, “He has a stutter, but he never shuts up. The one word he really knows how to pronounce is: WHY.” 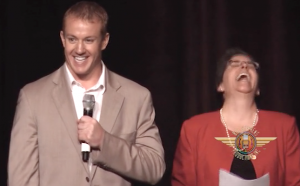 After graduating high school with a degree in Hard Knocks, Garret stammered his way through an extended college career playing football for the National Championship Carroll College Fighting Saints. A teammate of Garret’s said, “Wearing his jersey was as close to a saint as that kid ever got.”

After losing eight pints of blood in an accident that happened in 2007, Garret dedicated the rest of his life to finding his potential and helping others do the same. Not knowing which direction to take, he asked an adjunct professor at Carroll College for advice. Garret said, “I’ve always been told to find a good paying job, but I don’t know what I want to do when I graduate. What should I do?”

The professor stayed after class to talk. “What do you love to do? Do that and everything else will fall into place. You have to do what you love.”

With a love for fitness and a background in boxing, Garret had already been personal training a group of women in Butte, MT. With nothing but advice in his pockets, the young entrepreneur decided to grab his bootstraps. Entrepreneurship was a place where he had experience. They say 9 out of 10 business start-ups fail. To Garret, this just meant that his odds were increasing.

The success of the business uncovered a problem from his past. Schools were asking him to give presentations to help inspire the youth. Though a stutter is impossible to overcome completely, his lazy lips of yesterday have put a smile on his face, today.

From stutterer to speaker – from getting kicked out of high school English class to writing a book – Garret is too funny to be called a motivational speaker and too inspiring to be called a comedian.